How to Calculate Salary from Pay Scale, Basic Pay, Grade Pay – In India, Central and State government boards, commissions, and departments offer a variety of job openings to fill positions as needed. To be chosen for these positions, candidates must pass the written exam, interview, skill test, PET PMT, etc. stages. 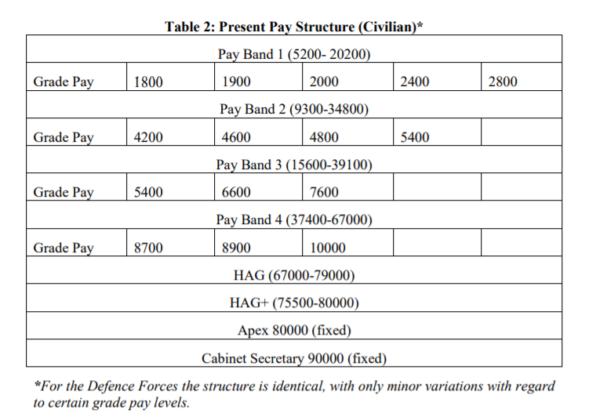 Those who were chosen get paid according to the wage scale outlined in the job announcement. In a government position, the pay scale for that position is used to determine the wage.

Below are the specifics, including basic compensation, cash-in-hand salary, and total remuneration. Knowing the pay scale for the position you are applying for will help you land a decent job.

Below you can check various Pay Bands and Pay Scales.

Depending on the position held by the candidate, the grade pay in Pay Band 1 can range from 1800 to 2800.

These pay ranges/pay bands are based on the Central Government Jobs Pay Commission Report from the 7th CPC. There are also more pay scales, such as the 9300-34800 range and grade pay levels of 3600, 4200, and 4800, depending on the state. Additionally, distinct posts may have pay scales with various pay bands.

In India, there are also other pay scales that are based on a state’s requirements. For instance, the base salary for a Group D employee in Haryana begins at Rs. 16900. Please take aware that DC Rate contract staff members do not get paid according to pay scales.

Formula on How to Calculate Salary from Pay Scale

compute various allowances, which are then added to the basic pay to determine total remuneration.

Details on the 2800 Grade Pay salary:

Details on the 4800 Grade Pay salary:

Details on the 5400 Grade Pay salary:

Details on the 5400 Grade Pay salary:

Information on the 6600 Grade Pay salary:

Details about the 7600 Grade Pay salary:

Details on the 8700 Grade Pay salary:

Details on the 8900 Grade Pay salary:

Note: The aforementioned Cash in Hand Salary does not reflect any deductions for Income Tax (if applicable).

From the figure above, you can see the numerous pay tiers as well as the levels of basic pay.

Levels in All Pay Scales:

Basic Pay: This is the core of salary as many components (allowances) are calculated on this.

Pay Scale: It is a system that determines how much wages / payment is to be done to the employee. It is the range of the salary in which starting and last basic pay are listed.

Various allowances are added to basic pay to calculate total salary per month.

Please take note that the above-mentioned salaries and pay scale information are approximations based on Central Government Positions (Railway, PSU, SSC jobs, etc.). Offered that it depends on the allowances given, the employee’s actual salary may vary by a certain amount. Depending on state policy, salaries could be low or high.

How to Work Out Your Salary From Your Basic Pay

Related Tags: How to Calculate Salary from Pay Scale