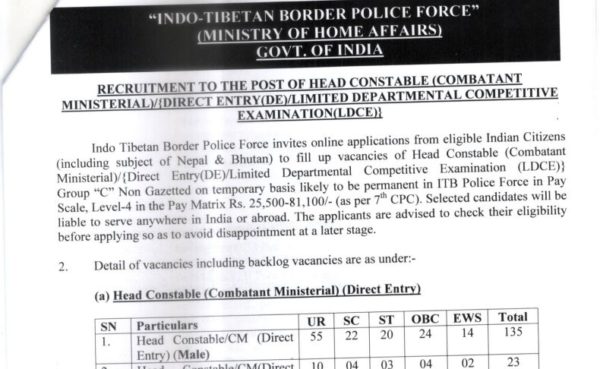 The ITBP recently published job postings for ASI and Head Constable positions. If you’re interested in learning more about the pay structure and salaries for all ITBP positions, including Head Constable, SI, ASI, and Constable, you can find detailed information here.

The table below lists the post’s name, rank, level, and pay scale.

While stationed in designated border areas, ITBP employees get a variety of benefits, including a Dearness Allowance, Washing Allowance, Ration Money, Special Compensatory Allowance, and Transport Allowance. Additionally, they receive a free uniform, free housing or HRA, a free leave pass, free access to medical services, and any other benefits that may be available from time to time.

Newly hired applicants for Constable (GD, Tradesman, etc.) positions in ITBP are put in Level-3 of the 7th CPC pay matrix with beginning Basic Pay of Rs. 21700 per month (equal to 5200-20200 Grade Pay 2000). Candidates receive a variety of bonuses in addition to their base pay. The New Restructured Defined Contribution Pension Scheme of 2004 covers candidates.

There have recently been 248 Head Constable positions advertised by ITBP (Combatant Ministerial). Newly chosen candidates for these positions will receive salaries in accordance with the Level 4 Pay Scale of the 7th CPC Pay Matrix (Rs. 25500-81100 equivalent to 5200-20200 Grade Pay 2400). The Level 4 basic pay grade has a starting basic pay of Rs. 25500 and an ending basic pay of Rs. 81100.