Icelandic National Flag – Article 1 of Flag Act No. 34/1944 states the following about the Icelandic national flag: “The blue hoist parts are square and the blue fly sections are the same width as the two squares but twice as long. 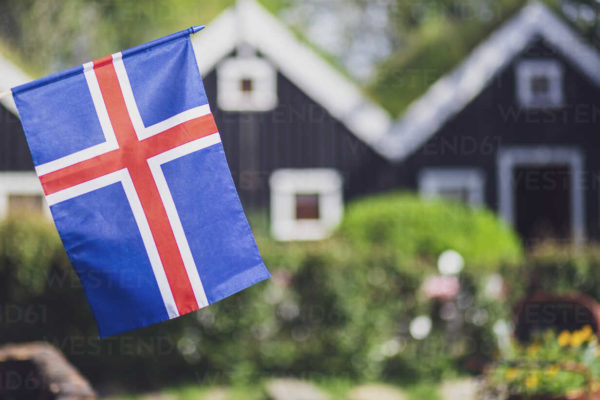 According to the Flag Act, the colours of the flag are “sky blue,” “fire red,” and “snow white.” As stated in Prime Minister’s Announcement No. 32/2016 on the Icelandic Flag, standards are now utilised as a reference to clear up any confusion over the colours.

Information about the flag’s colours is supplied by the Prime Minister’s Office and Icelandic embassies overseas, according to Announcement No. 6/1991.

The Icelandic National Museum and police stations must also show the flag in its proper colours and dimensions.

The national flag is the same as the state flag (swallowtail flag), but with a swallowtail added to the fly end.

The fly end is cut along straight lines drawn from its corners towards its centre line to intersect the inside border between the fly end sections at the point where 4/7 of their outer length and 3/7 of their inner length meet.

This flag differs from the national flag in that its fly end sections are three times the length of the hoist sections. Where these lines intersect the red cross’s arm, a perpendicular incision is made.

The state flag (swallowtail), which depicts the intersection of the arms of the cross in the Icelandic coat of arms, is flown by the president of Iceland. Shield bearers stand on a background of white.

The customs flag is the national flag with a capital T in the canton (the term for customs in Icelandic is “Tollur”). It comes in silver T-form. Half of the breadth of the canton makes up the T’s height.

The Prime Minister’s Announcement No. 32/2016 on the Icelandic Flag. The Icelandic national flag’s colours are as follows:

The colours are based on the SCOTDIC (Standard Coulour of Textiel, — Dictionnaire Internationale de la Couleur) scheme in the manner described below:

Colour systems and codes for print and monitors:

The flag must be displayed in its correct colours and proportions in the Icelandic National Museum and police stations. These rules are based on Flag Act No. 34/1944 Article 13; see also Article 9.

1991 No. 5 Presidential Proclamation on Flag Days and Flag Times, 23 January

On the following days, the flag must be flown on public structures that are under the control of representatives or directors expressly designated by the government:

On all the above days the flag shall be fully drawn, except Good Friday, when it is flown at half mast.

Other days than those stated in Article 1 and the occasions on which the flag shall be flown on land shall be decided by the Office of the Prime Minister.

A flag shall not be hoisted before seven o’clock in the morning and normally not be flown for longer than sunset, and never until midnight.

If a flag is flown at an outdoor gathering, official ceremony, funeral or commemorative event, the flag may be flown later than sunset or for the duration of the ceremony, but never longer than until midnight.

The Icelandic Coast Guard or Icelandic Maritime Administration shall be consulted on the use of flags on boats and ships.